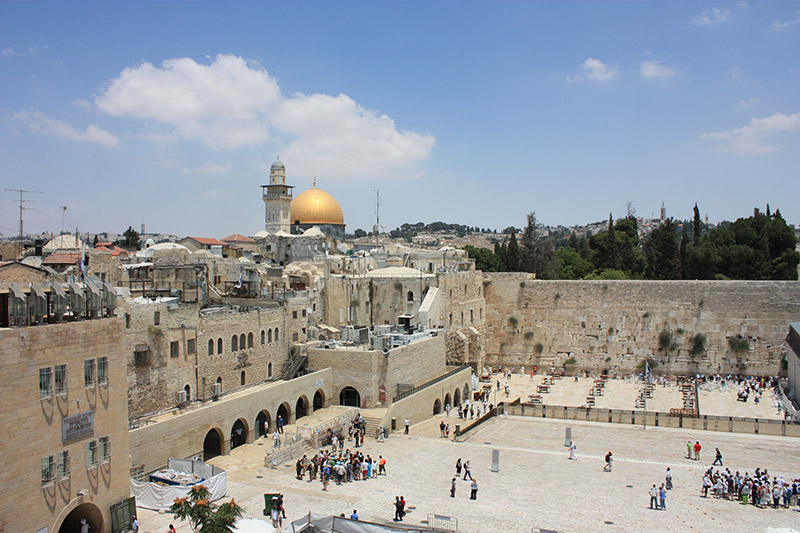 Netanyahu will not be frightened if he has to make a nuclear deal with Iran that is detrimental to his nation's interests nor will he be paralyzed by the dangerous ramifications of this woke mentality that is destroying America from within and threatens to blow up the entire West.

As a European and an upstanding Christian, I have always believed that the best option, that is, the best alternative to defending and promoting Western society and the values on which it was founded and has developed over time, was to follow the example of the United States of America. And if this were to falter, the last option would be Israel. From what I have witnessed in social and political evolution in recent years, and accelerated under President Biden, I have become progressively skeptical about America. With Benjamin Netanyahu's in command, Israel is starting to look up. This may mean that I am no longer left with the best option, but at least I'm left with the last one.

Israel has all the traits of what the West has been. As a Jewish state, it anchors the religion of the Jewish people to its national identity, regardless of whether it welcomes other faiths into its midst. As a capitalist or free market economy, it has embraced innovation and has proven to be developmental machine, deriving from its own research programs the solution to many of its problems. Everything from drip irrigation, given the scarcity of water, to the detection of potential terrorists according to the uncontrolled movement of their facial muscles. As a nation subject to harassment and attacks from many of its neighbors who refuse to acknowledge its existence, it knows that it must defend itself with weapons and is willing to make the sacrifices that this entails.

This leads us to the European left, which, for some years, viewed Israel as the fulfillment of the socialist dream. It was as though it had an almost tangible human presence. Europe was not only disenchanted with the Jewish country and the Jewish people, but went on to condemn them for wanting to prosper and defend themselves in order to save themselves.

There was a time when what was good for Coca-Cola was good for America; and what was good for America was good for the rest of the free world and for those who, under communist totalitarianism, aspired to live in freedom. Hollywood took America and the American Dream around the globe. The idea that through one's own efforts, one could climb the social ladder and prosper, dazzled and attracted millions of people who dreamed of a better life, a moral life, a life that revolved around family, work, effort and sacrifice.

Unfortunately, America has suffered an epidemic of Wokeism and has lost its sense of national community in favor of politics based on the most absurd identities. This Wokeism, in its fight against authority, attacks the traditional role of family and tries to displace it from the center of social influence and importance. It seeks to sow confusion, wanting to erase biological sex as a differentiating factor between men and women, between boys and girls. It is in favor of self-definitions of non-binary women, questionable men, transgender or genderless, going off of a whim. Wokeism has changed universities. Instead of being places to confront ideas, they have become safe spaces, where any triviality can offend someone and those who dare to express their alternative opinions are cancelled. Who wouldn't wantto disturb a young adult who only wants to hear their own opinions echoed and avoid opening their eyes to the harsh and cruel reality, as it has always been? Wokeism turned into an authentic instrument of censorship of the media and social networks, including political manipulation by Twitter's top managers, as we have learned after being purchased by Elon Musk. Wokeism makes politicians behave like alcoholics in a rehabilitation group, ready at all times to confess their alleged sins if they do not save the planet, if they do not persecute naysayers or if they act soft in front of all those who do not belong to this tribe.

On the other hand, crony capitalism, which has brought a monumental and rapid wealth to the financial world, has been built on the ruin and sweat of millions of Americans struggling to stay afloat in a society where the social elevator does not work and the lesser skilled, such as industrial and agricultural work, is viewed with contempt. Washington has always been viewed as a distant place wanting to control the whole country. Now it is the elites who are isolated from the majority of citizens' real life, defending their privileges and thwarting the famous Dream.

Donald Trump did not create the political and social polarization that afflicts the United States, he only recognized it and dared to talk about it and seek the appropriate therapy. But he did not succeed. The establishment was stronger and more determined than one might have even thought.

This rapid and corrosive social transformation of America has nearly taken hold in Israel, where the slightest strategic error can end its existence. The rotating government that came out of the ballot box last year, led first by the conservative Bennett and then by the moderate Lapid, practically endorsed all the woke proposals emanating from Washington. Such was his desire not to confront the Biden Administration. I suppose some would accept it with resignation, considering dependence on the US inevitable and believing that, in the end, Americans always do the right thing.Some thought others would gladly embrace it, believing that the leader's task is to go along with the times. And yet, Wokeism is the most potent corrosion that Israel has had to deal with in recent years, even much more than BDS campaigns. First, because it affects the political leaders of allied countries or essential parts of the West, starting with America. Second, because it also manifests itself in many young American, British and French Jews. The former threatens to deepen the rift between Israel and its allies; the latter, to open a deep wound within the Jewish community.

With Biden in command of the United States and Lapid of Israel, that dual threat would only grow unchecked. With Biden in Washington and Bibi in Jerusalem, there is a chance of contention. Netanyahu has given ample evidence that, if he had to choose between the security of the State of Israel and his relationship with the American president, he would choose the security of Israel and its people. He will not be frightened if he has to thwart a nuclear deal with Iran that is detrimental to his nation's interests nor will he be paralyzed by the dangerous ramifications of this woke mentality that is destroying America from withinand threatens to blow up the entire West.