Why we should celebrate the Abraham Accords 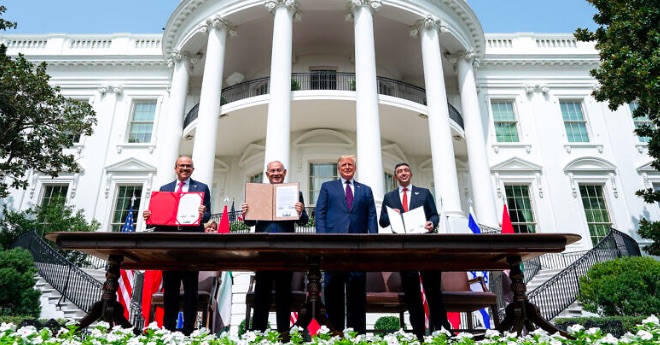 In a world defined today by disruption and disarray, the Abraham Accords signify an historic moment of co-operation and realignment.

The Abraham Accords are truly transformative and will pave the way for historic realignments across the Middle East. Yet one of the most interesting aspects of this development is not what has been achieved, but how it has been achieved.

We were told that moving embassies to Jerusalem would lead to irreparable diplomatic strife. That accepting Israeli sovereignty over the Golan Heights would raise the spectre of violence. That ending the Iranian nuclear deal and eliminating its terror chief would provoke regional war. That standing behind Arab allies confronting Iranian proxies in Yemen and elsewhere would inflame conflict. That dispensing with Palestinian obstruction as a condition for Arab-Israeli relations would forever damage the prospect of peace.

Instead, the Trump administration framed events in a new paradigm, culminating with a treaty ceremony on the lawn of the White House, the first Arab-Israeli accords in a quarter century, and the promise of more to come. The outlines of the new framework are clear enough: pursuing peace through strength, supporting Israel unequivocally, backing the region’s moderates and opposing its extremists.

In short, this breakthrough was achieved by breaking with doctrines that had produced no results for decades. While critics may never give the administration the credit it deserves, let us insist that they at least absorb these lessons.

The same critics will have the same qualms in congratulating Benjamin Netanyahu. They should not. Netanyahu has once again demonstrated the strategic and political skills that have made him Israel’s longest-serving leader. He effectively used the threat of West Bank annexation to get the most consequential progress in Israel’s international relations in decades. In the process, he shelved an issue that splits both Israelis and their friends, incentivized Arab co-operation, and isolated the Palestinian strategy of relentless rejection. The day Palestinian leaders move past this historic error and genuinely embrace a two-state solution, a new world of Arab-Israeli coexistence and advancement awaits them.

It is, however, the Gulf Arabs, led by the United Arab Emirates, who have taken the boldest step. Their motives go well beyond the interests they share with Israel in opposing Tehran’s hegemonic nationalism and clerical extremism.

For the Emiratis, this moment of leadership traces back to the vision of their founder, Sheikh Zayed al Nahyan. He sought to create a modern country with an advanced economy and an openness to the world. From the founder to his sons and successors, including Sheikh Khalifa, Crown Prince Mohammed, and Foreign Minister Abdullah, the UAE has been relentlessly pursuing social development and economic opportunity, of which the new Israeli connection will only provide more. It has also advanced a tolerant model of Islam and, more recently, a full embrace of religious pluralism.

The establishment of the UAE’s Abrahamic Family House — a major project encompassing a mosque, church and synagogue — is but one testimonial of the Emirati ideal of coexistence. The nation has a wide range of Christian denominations and it welcomed Pope Francis on an official visit last year. Indian Prime Minister Narendra Modi came to initiate the construction of an unrivalled Hindu Mandir. And the Aga Khan has built the Middle East’s first Shia Ismaili Centre in Dubai. At a time when some in the region are propagating various versions of extremism, the UAE is building a modern vision of an Arab monarchy that leads by example.

In a world defined today by disruption and disarray, the Abraham Accords signify an historic moment of co-operation and realignment. They are a statement of unity in a time of division and a reminder that leadership still matters. For, at their core, these agreements were delivered by leaders who saw an opportunity and had the convictions and skills to make it happen.

The consequences of this normalization will be profound. The new security architecture between Israel and its Arab allies will become deeper, bolder, and visible. A new economic collaboration will take hold, spanning a spectrum of technologies and infrastructure, from the seas to space. And perhaps most importantly, new and enduring relationships will be formed between young populations on the terms of peace, pluralism and progress.

It is in all of our interests to ensure the success of these Accords, to celebrate the future they promise, and to make permanent this welcome departure from the paradigms of the past.