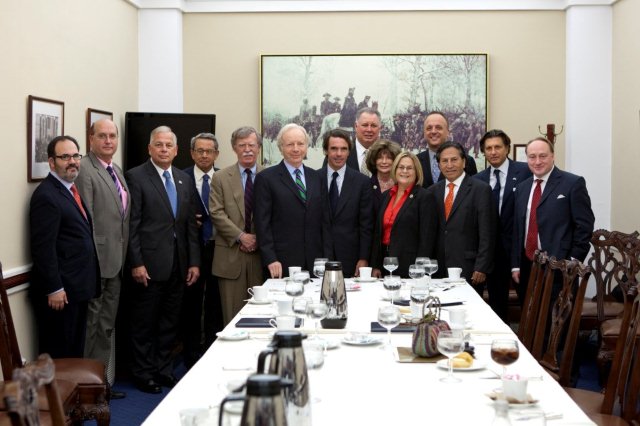 What follows is the full text, from the Library of Congress, of a bi-partisan resolution introduced in the House of Representatives in support of the Initiative, co-sponsored by Rep. Ileana Ros-Lehtinen (R-FL) and Rep. Albio Sires (D-NJ).

Recognizing the formation and supporting the objectives of the Friends of Israel Initiative.

IN THE HOUSE OF REPRESENTATIVES

Ms. ROS-LEHTINEN (for herself and Mr. SIRES) submitted the following concurrent resolution; which was referred to the Committee on Foreign Affairs

Recognizing the formation and supporting the objectives of the Friends of Israel Initiative.

Whereas, as noted in its mission statement, the Friends of Israel initiative was founded `a) To combat the delegitimization of the State of Israel at home, abroad and inside the institutions of the international community. b) To publicly show our solidarity with Israel’s democratic institutions - the legitimate expression of the Jewish people’s millennial aspiration to live in peace and freedom in its national homeland. c) To support Israel’s inalienable right to secure borders unmolested by terrorists or tyrannical regimes so that its citizens can continue living with the same guarantees that our own societies enjoy. d) To consistently and firmly oppose the prospect of a nuclear armed Iran. e) To work to ensure that Israel is fully accepted as a normal Western country, an essential and indivisible part of the Western world to which we belong. f) To reaffirm the value of the religious, moral, and cultural Judeo-Christian heritage as the main source of the liberal and democratic Western societies.’;

Whereas Israel has provided Jewish people from all over the world with the opportunity to reestablish and participate in a Jewish state in their ancient homeland with Jerusalem as its undivided capital;

Whereas Israel enjoys a vibrant democratic political system, functions under the rule of law, has a flourishing market economy, and excels in technological innovation and entrepreneurship that benefits mankind;

Whereas Israel has bravely defended itself from repeated military and terrorist attacks since it declared its independence;

Whereas Israel is entitled to the same rights as every other sovereign, democratic state, including the right to self-defense;

Whereas Israel’s fundamental right to exist as a democratic, Jewish state must be recognized and defended by all responsible nations;

Whereas Israel is threatened by an escalating worldwide campaign to delegitimize the Jewish state and deny Israel its fundamental rights;

Whereas Israel and the entire Western world share the same threats and challenges, and threats to Israel must be treated as threats to the West;

Whereas these growing threats include violent Islamist extremism and the possibility of a nuclear-armed Iranian regime, which must not be tolerated or accepted by responsible nations;

Whereas the United States and Israel enjoy a longstanding strategic partnership and friendship based on shared interests, democratic values, amity, and respect, and that include educational, scientific, technological, intelligence, military, and homeland security cooperation; and

Whereas the people of the United States share a deep affinity with the people of Israel and view Israel as a strong and trusted ally: Now, therefore, be it

Resolved by the House of Representatives (the Senate concurring), That Congress--

(1) recognizes the formation of the Friends of Israel Initiative and affirms its founding goals, as articulated in its mission statement; and

(2) reaffirms its enduring, bipartisan support for the alliance and friendship between the governments and peoples of the United States and Israel, for Israel’s security and right to self-defense, and for Israel’s right to exist as a democratic, Jewish state.