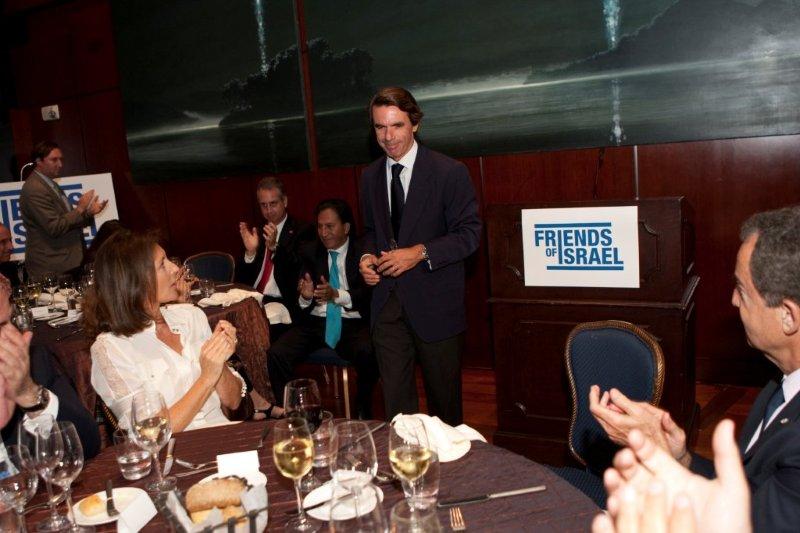 The following is the text of a speech delivered to more than 70 guests, friends and supporters of the Friends of Israel Initiative in Washington DC by Jose Maria Aznar.

Thank you all for being here tonight in this first event in DC by the Friends of Israel Initiative.

I know that some of you have made an extra effort to be here. Between the upcoming mid-term elections and the High Holy Days, many of us should probably be somewhere else tonight. So, I really appreciate the fact that you are here with us.

Though for a Spaniard having dinner at eight is almost like a late lunch, I know that you have to start early tomorrow, so, I’ll be brief.

I also know that when a politician says “I’ll be brief” the audience should start trembling, but as a former politician I’m entitled to tell the truth, trust me.

I’m here tonight to present to you a work in progress, the Friends of Israel Initiative. An idea I have been promoting with the help of some friends, some of them are here tonight, like:

And champion of human rights and democracy Former Czech President Vaclav Havel, the latest member of our growing Board.

They all answered my initial call, last May, because all shared with me the sense of urgency to do something about the growing trend of deligitimation of Israel.

Our first meeting took place in Paris the very same day Israeli troops stopped the Flotilla heading to Gaza. Very timely, as you can tell.

Our second event took place in calmer waters, in late July, in London.
And now, we are here in Washington D.C.

Why? Very simple: We believe in the West, In the values all we share . In the ties that bind free societies, and distinguish our democracies from those governments who have yet to give way to the rights of their people and the arc of history.

And, we know – better than many – that the West has been shaped, led and defended by America.

As a European, I don’t have any problem saying that America has been a force for good in the World, protecting peace, promoting liberty and human dignity, and expanding prosperity. Furthermore, America has been the best ally of Israel, and it should remain so. And America’s role as the Leader of the Free World, as the the spark of hope for a better life for countless souls the world over should be a source of pride for all Americans.

It certainly serves as an inspiration to us.

Many of us came from Europe. Most of us are not Jewish. And I am sure that many of you may be wondering what it is that we seek, and why we believe it so vital to stand up and be counted on this issue.

Hence, our interest to explain here what we want and why.

We defend Israel because we believe that is the best strategy in current times to defend the West.

When we started putting this Initiative in motion, the whole World was condemning Israel for reasons I don’t need to elaborate since you know them better than I do.
Now, the atmosphere has changed a little since direct talks between Israel and the Palestinians have resumed and the peace process is moving ahead. Despite all the difficulties the negotiations may experience, I think we all should recognize the value, the prospects, and the hopes they represent. I am sure that Israel wants peace, and I know that all true friends of Israel want to see her achive that dream of peace and security.

But as we made clear in our first statement (which should have been on your chair tonight, by the way), there are problems in the region greater than just an Israeli-Palestinian peace agreement. Problems that will not go away even if a peace agreement between Israel and the Palestinian Authority is eventually reached.

While Israel has made peace with Egypt and Jordan, and her economy has strengthened in recent years, now not decades ago, Israel, is facing increasing dangers. She has been forced to defend her people from Hezbollah in the North and thousands of Hamas rockets in the South. And. perhaps most worryingly, Israel is increasingly threatened by the scenario of a nuclear Iran – something the world must certainly act urgently to prevent.

On top of that, Israel is under a new kind of attack. Not conventional war as in 1948, 56, 67 or 73. Not terrorism as we saw in the 70s, 80s and 90s. But a new kind of attack – an attack on Israel’s legitimacy, on her right to exist. A “soft-war”, where many of its adversaries are employing legal tricks, multinational bodies, and an army of dubious NGO’s to present internationally Israel as an illegitimate state, as a barbarian State, a State that should be isolated and converted into a pariah State.

We think this is intolerable. It is unjust, morally wrong, and a strategic risk -- not only for Israel and its people -- but for all of us.

Israel is an integral part of the West, and the weaker it is, the weaker the entire West will be perceived to be.

Even if we want to turn away from the traumas of 9/11, we simply do not have the luxury to choose our enemies. As Senators Baker, Dole, Daschle and Mitchell made clear in their latest report, published 5 days ago. by the Bipartisan Policy Center, the threat to our way of life from radical islamists is real, and it has not yet been eliminated.

Let me be clear. We don’t want in any case to defend any particular Israeli government or any particular set of policies or any particular party. Israeli institutions are mature enough to defend their choices. We want to stand up for the right of Israel to exist. Judeo-Christian values form the roots of our civilization. Delegitimizing Israel undermines our identity, warps our values and put at risk what we are and who we are.

So, dear friends, it is not only the threat that if Israel goes down, which, make no mistake, many of its enemies would like to see happen, we all go down. It is that letting Israel be demonized will lead to the deligitimation of our own cherished values. If Israel were to disappear by the force of its enemies, I sincerely doubt the West could remain as we know it.

So, I conclude: Is it craziness for a group, as I said before, of mostly Europeans and non-Jews, to say: Enough. Stop this non-sense of making Israel responsible for all the problems in the region, if not beyond? Enough of the short sightedness which refuses to see Israel as a corner stone of our Western civilization?

We do believe that far from it, it is vital. For America, for the West, for Israel. And for our children and grandchildren and the world they will inherit. Because there is still right and wrong in this complicated world. And if we allow those fundamentals to be blurred and eroded and confused, we will all be dangerously adrift.

Defending Israel today means strengthening the West, standing up for our values, and their right to exist as a normal country, a fellow democracy and a celebrated ally in our great western alliance.

I hope that you will share our vision, and will help us in bringing reason and decency back to the discussion concerning Israel.

Thank you very much