Israel must be proactive in defending its legitimacy 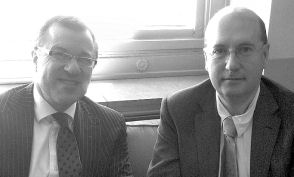 In an interview with the World Jewish Congress’ Dan Diker, Rafael Bardaji, Executive Director of FOII, says Israel’s challenges are mounting and its international isolation is growing.

In an interview with the World Jewish Congress’ Dan Diker, Rafael Bardaji, Executive Director of FOII, says Israel’s challenges are mounting and its international isolation is growing.

Dan Diker: How does Europe view the recent upheaval in the Middle East?
Rafael Bardají: First of all, the Europeans are scared to death about the short term implications of the events, like the flow of people leaving the region and coming to Europe I think we have lost the overall picture of what’s going on from Morocco to Pakistan. Second, I think Europeans are watching this like a movie, from a distance, unsure whether to position themselves in the front or the back row, but not trying to influence or shape the outcome of the events going on in the region. You can see this perfectly well in the Libyan case where the European Union and NATO have been waiting for the White House to produce a kind of leadership and are not taking any initiative on their own, or any active role, but are simply waiting for President Obama to say which is the right path to follow.

Why do you think France has been an exceptional case among European states?
I think President Sarkozy has shown an interest in playing a leading role in the Mediterranean arena from the very beginning. From the start of his mandate, he produced the Mediterranean Union Initiative. He has considered himself to be in charge of the job in the Mediterranean. So he had to say something. He also met with Libyan counsel. Actually, the Italians are more tightly linked to the Libyans’ fate because of immigration, investment, and oil and energy, but they are waiting to see what will happen.

How do you think Europe views Israel in light of the recent events in the area?
I think up to now we haven’t seen a change on the Israeli position. I think there is a kind of decoupled vision of what’s going on in North Africa or in the greater Middle East, and of what’s going on in Israel. At the end of the day, I think that privately all the leaders recognize that in this region, which is going through an upheaval, the only island of tranquility, stability, and democracy, is Israel. I think we should underline the fact that from Morocco to Pakistan, the only stable ally that we have is Israel. But because we are always tempted by the sight of destruction, we are focusing more on what’s going on in the region from Morocco to Tunisia, Libya, Egypt, Bahrain, and forgetting about Israel. The recent events here with the Iranian ship may change that, but we have not seen a transformation of that view up to now.

To what extent was the European vote on the issue of settlement building in the United Nations Security Council influenced by the certainty of an American veto?
It was not. I think the Europeans have a clear line on settlements. They tend to believe that the issue of settlements is central to the peace process, forgetting all the historical precedents, for example of its historic position on the margin of negotiations. They think the settlements are a policy of occupation that should be stopped and I don’t think that it will change no matter what the Americans are saying. It is unfortunate because I think there is a misunderstanding of the presence of Israeli forces and civilians in the West Bank.Many of the countries who voted in the UNSC are signatories to the very past agreements that allow both Palestinians and Israelis to build settlements until final status.

As a former National Security Advisor, how do you explain the dissonance between what they know legally to be true, in terms of Israel’s legal rights, and the way they voted to condemn Israeli illegal settlements, which has no legal or historical precedent?
First, there is no good knowledge of what a settlement really means geographically. Many people, including current leaders, believe that settlements are everywhere and that they occupy the majority of the West Bank. But it’s actually only about 1.2 ·/. of the land. Second, settlements are automatically linked to checkpoints and security measures – settlements mean occupation. That’s all. I think it’s a political and psychological attitude more than anything concrete. But more importantly, I think Europeans were concerned with settlements in a marginal way until the White House put the issue center stage. Because of that, the Europeans took to the issue as I never experienced before.

Do you think Israel has any room to maneuver in this case?
Let me give you an example. In early December we knew about the Brazilian initiative to put in motion a Latin American bloc recognizing the Palestinian State. We, from the Friends of Israel initiative, moved very quickly and went to see most of the major leaders on the continent, trying to explain to them that recognizing the Palestinian state prematurely, now, would not help the peace process. That’s one thing that can be done. You can go and explain to Colombia, to Mexico, to Chile, that this is the wrong path and that it is making the discussion more difficult.

What is your assessment of Turkey?
In the past we had, let’s say, a Turkey I, which was a close ally of Israel, a faithful NATO ally, close to the Americans, and was on the way to getting a better relationship with the EU. Now, however, after many years of investing in an Islamist policy, the Turkey we have is a kind of Turkey II, which is a different country, with different goals, divided, with different forces present, with the path to the Islamization of the country clearly taken. We have seen this in many diplomatic instances. In NATO, Turkey has been a painful ally over the last months., It has severed ties with Israel, and has not followed some critical questions with the Americans. I think Turkey is repositioning itself vis-à-vis the Western world, the Gulf and the Arab world, and is pursuing a more Islamist policy which could bring Turkey to the other side of the trench.

Israel just captured an Iranian ship laden with weapons and bound for the Gaza Strip. In your view, what is the regime’s strategy?
The long-term strategy is to become the regional hegemonic power from the Levant to the Gulf. I think they are trying to benefit from the turmoil going on in the region, and even though they were not fully behind the initials movements, they will try to benefit from it any way they can. At the same time, they have their proxies in the regions, from Hezbollah to Hamas, so they will try to influence the situation around Israel, while also aggressively pursuing their nuclear program. Because the world is distracted by ongoing changes, Iran has been out of the picture. Three years ago it was at the center of attention. We talked about sanctions, about increasing pressure, but now no one is talking about Iran anymore.
In my opinion, when the Western world and the international community are weak on Iran, Tehran tries to proceed quickly both politically and militarily. I think we need to put the Iranian regime back in the spotlight as soon as we can. There is a chance, if we are able to help the opposition there in some way, that we will at least have a more promising regime. However, we need to put Iran back in the spotlight, increase sanctions, including an oil embargo, something that could have a dramatic effect on its power. If not, Iran will pursue its nuclear program and will do whatever it wants with its policy, and be better off at the end of the day.

As a friend of Israel, what worries you the most with regard to Israel and the Jewish people?
I’m worried about the fact that we are not seeing the change that has to be made. We tend to see everything as business as usual, but we will soon be in a position where we are taken by surprise. Let’s say that Israel can handle all the changes around it, from delegitimization to the Iranian nuclear program. However, deeper trends could put Israel in a more and more isolated situation with many more constraints to act freely. Israel and the Western world are facing too many risks at once. Strategically and critically, Iran is the major threat to the future of this country.
But at the same time, we don’t know if this regional upheaval will end up with a system that is more tolerant and one that recognizes Israel, or on the contrary, will be very nationalistic and set against Israel, or will be a fundamentalist regime expanding around the world, a caliphate – we just don’t know yet. We need to function while defending Israel from terrorists slicing the throats of babies and stopping ships delivering weapons. It’s a wide variety and range of threats that have to be dealt with simultaneously.
Are they going to increase or decrease in the near future? My fear is that they are going to be more present, more challenging, in an international environment where Israel will have less and less freedom to act alone if needed. We need a stronger country internally, probably a more unified country, and be ready to make the sacrifices that we probably never experienced before. Israel’s allies will stand by, at best, if not say that they are not willing to take the risk that Israel takes action as needed. Israel will be in a more delicate position. You will have to face the same basic decisions, but the environment of your allies will be less and less benign.

What, if anything, can Israel do to fight this assault on its legitimacy?
I don’t think a magical solution exists. Many small actions need to be taken. We have to be more creative. Israel, in my opinion, has been very reactive. We have to sell Israel in a much more positive and aggressive way, as a land of opportunity and innovation, where technology has thriven. What elements of Israel can be sold to the mayors of major cities in North Africa regarding the management of transportation, housing, agriculture, irrigation, water treatment? We need to put Israel in a positive light, so we can start changing the image of it being the land of violence, force, and brutality. This will not require a public relations campaign, but Israel needs to be practical and sell the goods that can be sold.