Speech delivered at the House of Commons

Implications of the Unilateral Declaration of a Palestinian State 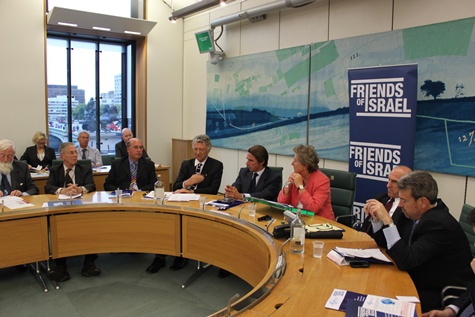 The following is the text of a speech by the FoII Chairman José María Aznar  at the House of Commons delivered on September 5th in London. "The discussion at the UN about recognizing a Palestinian state will have some important consequences, though not as dramatic as some may think".

It is a pleasure for me to be here to present the Friends of Israel Initiative second paper on the issue of the Palestinian State. The first one was prepared for our visit to Israel in late July, the second one, jointly with the Henry Jackson Society, specifically for this event. Both are available in printed copies for you.

Let me explain briefly why we care about the unilateral declaration. There are some people, like my friend John Bolton, who think that what the Palestinian Authority tend to do has no relevance whatsoever. The UN assembly can vote and recognize Palestinian as a State, but nothing will change on the ground because of that.

On the other hand, other people, like my friend as well, the Israeli defense minister, Ehud Barak, tend to see the UN vote as a “political tsunami” in his own words.

I have to say that I disagree with both. To me, the discussion at the UN about recognizing a Palestinian state will have some important consequences, though not as dramatic as some may think.

I have to remind you that the Palestinian state was already declared by Arafat in 1988, and near 100 nations at the UN recognized that as a fact. Though, I have to add, Palestinian only exist at that time, and since then, as a virtual reality. So, some say, the next general assembly annual meeting will be roughly the same.

But this time will be different for a variety of reasons. First, contrary to the 80´s this time there is such a thing as the Palestinian Authority. Not Fatah, not the PLO, but a Palestinian Authority with some degree of institutional control over its people. We can argue about what level of governance the PA can attaint, being Hamas ruling at Gaza and Fatah at the West Bank, but it seems to be undeniable that some institution building has been achieved at least in the West Bank, and because of that, the image that a State will be viable if declared and recognized internationally. True or not.

Second, and no less important, today Israel has been subjected to a denigration campaign that has place its right to exist under continuous attacks. If the Palestinians finally go to the UN to get their state recognized, knowing as we -and they- know that there is no chance they will get what they want, their initiative will serve only to delegitimize even more the State of Israel, put logically on the defensive, saved finally by the traditional support of America.

Actually, if the Assembly accepts the unilateral declaration of the Palestinian State, little will be gained at the UN, as Bolton suggests, but it will encourage and nurture a new offensive campaign of lawfare against Israel, as Abbas suggested in his NY Times article last July, and Barak fears.

That´s why, we, the Friends of Israel Initiative, are very concerned with what will happen in NY and after.

You will see in the two papers we have produced, that we don´t agree with the path taken by the Palestinians.

We believe that the unilateral course will not produce good results; on the contrary, it will push away any prospect of any final peace agreement. We don´t see an alternative to the bilateral negotiations. I’m sure my colleagues will touch upon the several negatives aspects of moving away from a negotiated settlement to a world where unilateralism is the norm.

But let me just touch on one issue. Some people say that Abbas is moving in the direction he is moving out of desperation, He is not. Some of the leading figures in his camp, even in his own government, like the PM Salem Fayyed, do believe going to the UN is a wrong move.

To me, if the Palestinians go to the Un is, simply put, because we, Europeans, have made then believe that the unilateral path is legitimate and acceptable. And that is our own responsibility, and mistake.

Here in London, the government has chosen not to say anything critical because waiting till the last minute may extract more concessions from Jerusalem; in France, the president has declares that if there is no agreement before the meeting of the UN, its government may recognize the Palestinian State.

It is time to tell the Palestinians that if they really want a State they must pay a price for it. They cannot have the cake and eat it.

And what should they do? Very simple: First, to recognize Israel as the State for the Jewish people. As the UN actually did in 1947, second, that if an agreement is finally reached, it will be final. No more demands the day after. There are some Palestinians, like Hamas, that only look for one State, a Islamic one, no Israel on sight; and there are other, more moderate, that want one State today to start pushing Israel out of the picture by any means. A final agreement has to be precisely final. And that’s why it has to be negotiated and consensuated between the two parties.

Ladies and gentlemen, if you really want peace between Israel and the arabs, recognizing the Palestinian State unilaterally, out of any negotiation, is not the way. It will be the opposite. If the UN goes in the Abbas direction, the Israelis will counteract; if the UN doesn’t, many Palestinians, overexcited by Abbas and our smiles, will feel frustrated. Violence may erupt and get out of control easily.

We still have time. We must insist that nothing can happen outside the table of negotiations. We must ask our leaders to tell that to the Palestinian leaders so they can know that they have to sit down with the only counterpart they have, Israel.

Anything else will be a dangerous mirage for them and for us.