Hamas and the Exploitation of Death 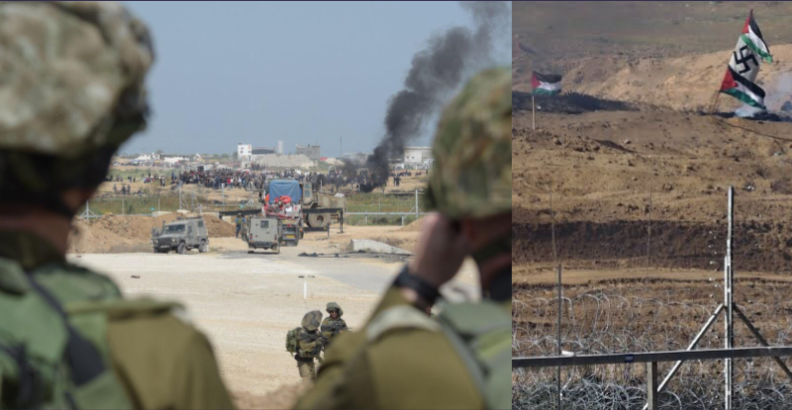 Nonetheless, we must remember it forcefully: Nations have all the legitimacy, protected by international law, to defend themselves against aggression. The poor and innocent Palestinians appearing in those images are neither so poor nor so innocent. They may be oppressed, but by their own corrupt and totalitarian rulers, whether in Gaza or in the West Bank.

In a Europe where the discourse by the elites puts the blame on territorial borders for many of its evils; and in a Spain where only the secessionists still seem to believe in them, according to the statements of our own prime minister, it is practically impossible to understand that other countries can still believe in having their borders and are willing to defend them even by force when they are violated. These days we are seeing this unfold with the Palestinian assault to the border fence between Gaza and Israel and the Israeli Army’s response. Our timid foreign minister, Alfonso Dastis, has been quick to criticize Israel, for its alleged "disproportionate response" while he was completely silent as to pronounce even the slightest criticism about the leaders of Hamas — the inciters of the violence we are seeing.

I have to admit that it does not surprise me because we have a pusillanimous government in all fronts, domestic as well as international. Also because it is just the continuation of the ever-present double standard regarding Israel since it is the only country about which the presumption of innocence never applies. It is actually quite the opposite: Israel is permanently forced to demonstrate that it is not guilty.

The genetic desire to condemn Israel by default for any of its actions—or inactions—has led to losing sight of who it is we are trying to protect: Hamas, a terrorist organization that governs Gaza with an iron fist since it put an end to the authority of al-Fatah via a coup d’etat more than 10 years ago.

As a member of the High Level Military Group, an international organization that brings together former state and military leaders spanning the five continents, I have been able to visit Israel’s border with Gaza and have also been granted access to Israeli commanders and soldiers defending this border. Today we have a member of the Group deployed in the area to gather information. Thus, for what I know:

1) What the media depicts as peaceful and spontaneous demonstrations are actually neither peaceful nor spontaneous. The leaders of Hamas have invested significant time and resources for social mobilization, pushing Gaza residents to gather at the fence that separates them from Israel. Long columns of buses packed with demonstrators do not generate spontaneously. Throwing stones and Molotov cocktails, sending incendiary kites, and charging against the fence can hardly be described as peaceful actions.

2) However, the tactics of the latest charge this week have changed substantially. In previous protests, those operative cadres of Hamas involved in the mobilization of protesters would camouflage among them in an attempt to reach the border and penetrate Israeli soil. Thus, out of the 56 protesters killed in the past few weeks, 40 could be identified as militants of Hamas and other radical groups. But now, in order to preserve the lives of its militants, Hamas does not allow its cadres to participate in the front rows of the assaults on the fence; they remain behind, at a range of 700 meters, with the sole task of putting residents in harm’s way at the Israeli-established security zone — simply to be shot and, if there are casualties, even better for Hamas.

3) Israel's defense forces have behaved with great professionalism and restraint at all times. First, they threw pamphlets warning the Gaza population about the risks of coming a few meters close to the fence; second, warning in Arabic via megaphones about this risk and calling for the dispersion of the demonstrators; third, homes and bus companies have been alerted by phone not to help the purposes of Hamas; fourth, drones have been deployed to drop tear gas and fetid anti-riot substances, but if the demonstrators got too close, warning shots would be fired above their heads and only if they came dangerously close to the gate, they would be shot first in a disabling manner (to the legs). Lethal shots have always been the last resort in situations of serious danger to the integrity of the border.

4) Many of the images from the Gaza Strip, duly controlled by Hamas, are simply an exercise in blatant manipulation. Just analyze how the same teenager allegedly killed by IDF shots later shows up alive and well in other photos, and dead again on different locations. Examples such as this one abound.

Yet it seems that none of it matters for Israel is the culprit and Hamas is the victim. It does not matter that we know for certain that the leaders of Hamas are looking for precisely those images; that these leaders would lead their people to slaughter since it yields them great returns. After years of terrorism and thousands of rockets against Israeli populations and civilians in an effort to break Israel's will to defend itself, Hamas knows that it cannot achieve it. However, if Hamas turns international public opinion to its side, the pressure on Israel will be unbearable. We are not witnessing just plain protests; these are mobilizations of civilians for the purpose of war, something that is strictly prohibited by international law.

Moreover, those who—as our Minister Dastis—demand restraint and proportionality in the use of force, do not contribute anything practical about how to defend a fragile fence faced with the push of tens of thousands of assailants. How would they do it? By letting them come through?

It is a pity that European leaders (particularly the Spaniards in our case), have given up on the defense of our borders. Even worse, they seem intent on erasing them completely. In the same fashion, in complete disregard of the experiences of recent years, they seem oblivious to the fact that conflicts and wars adopt new forms. It is only natural; for all too many, armies are just ornamental — or, at best, a tool to support part of their national industry.

Nonetheless, we must remember it forcefully: Nations have all the legitimacy, protected by international law, to defend themselves against aggression. The poor and innocent Palestinians appearing in those images are neither so poor nor so innocent. They may be oppressed, but by their own corrupt and totalitarian rulers, whether in Gaza or in the West Bank. If you do not believe me, ask any of the 1.5 million Arab-Israelis living in Israel if they would prefer to move to Gaza or the West Bank to pursue the dream of an independent State and thus be saved from Jewish oppression. You would be in for a surprise.