Friends of Israel Initiative in the AIPAC Policy Conference 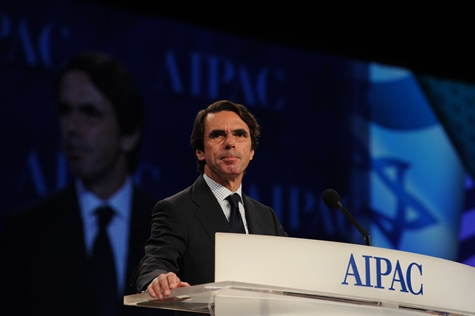 The following is the speech delivered by the FoII Chairman José María Aznar to the AIPAC Policy Conference, last 24th May in Washington.

It is a real honor to be here representing the Friends of Israel Initiative. And to be among some of America’s, and the worlds, strongest -- and most effective -- friends of Israel.

Howard, they tell me after this session thousands of people will be going to lobby Capitol Hill in support of a strong and enduring US-Israel bond….That is good news, my friends. And though I am obviously not American, I want you to know when you go to the Capitol today to speak out in support of peace, in defense of democracy and freedom, in support of Israel, I am with you. And my fellow leaders of the Friends of Israel Initiative are with you. And our supporters all around the World are with you.

Almost a year ago, I called upon a number of friends, including Nobel Peace Prize laureate Lord Trimble of Ireland, former Czech President and hero Vaclav Havel, former President of Peru Alejandro Toledo, former Clinton Cabinet Secretary and President of Miami University, Donna Shalala, Former US Ambassador to the United Nations John Bolton and several others to establish a high level group dedicated to fighting the growing global chorus working to isolate and delegitimize Israel, to work to and present Israel as a normal country, with all the imperfections and the virtues of any democratic country in the World.

Put simply, we MUST defend Israel if we want to preserve the West as we know it.

Look at the changes sweeping the region. Uncertainty is the dominant factor. And Israel is both more important to the West – and more besieged by hostility than in recent memory.

Now is a time for action. That is why we are not a PR organization. We want to have a positive influence among current decision makers, primarily in Europe, but also beyond. As in Latin America, for instance, where the campaign to get a Palestinian State recognized right now has been growing in strength lately.

Using our natural contacts, and engaging our peers in critical dialogue, we attempt to convey our views and encourage others to avoid mistaken political decisions. And we cannot let up. There is much to do.

One need only look at how the events of the past few months played out to be reminded of the rightness of our cause.

What stronger case could ever be made than when between Morocco and Pakistan there is only island of stability, democracy and prosperity… and it is the State of Israel.

In these days of turbulence it is imperative that we know who our friends are, and that we have leaders with the moral clarity and conviction to know the difference.

We are not agnostic about the outcome of the titanic struggle playing out in the region. These are times of potential promise but also of real danger to the world. Things might go in the right direction, or they could go dramatically wrong.

And we don’t have to look far to see how wrong. We’ve seen the Palestinian Authority choose a unity with terrorist organization that praises Osama bin Laden… and attacks America for delivering justice to a dangerous murderer. And while the announcement in Cairo of HAMAS and FATAH joining arms may have come as a shock to many…it should not have been a surprise.

For two years, the Palestinian Authority and the PLO have REFUSED peace talks with Israel. In fact after Ehud Olmert made yet another a historic peace offer. Not only did the President Abbas choose not to respond before choosing “unity” with those dedicated to destroying Israel, they have reverted even further to a position not seen in nearly 20 years. Today they refuse to even sit across form Israel at the negotiating table. Not since 1991 have we seen such things.

THOSE who do not make clear that the only path to peace – which is the only goal – lies strictly in direct bilateral negotiations, undermine the chances for peace. The Obama Administration has said it opposes unilateral efforts at the United Nations. We applaud this stance and encourage them to say so again and again…

The European flirtation with supporting the unilateral recognition in September, and moves by several Latin American nations this year to recognize a Palestinian state are contrary to peace.

And with HAMAS as part of the Palestinian Authority government those states who recognize a unilateral Palestinian State will be necessarily be embracing a terrorist state. This cannot happen. We must speak out. And we will.

We must confront the lies. And we must make sure that our elected leaders know the truth and stand with out friends. Israel shares our values. Israel’s security is our security. And the threats that loom over Israel endanger us all.

We are concerned that the movement in favor of unilaterally recognizing a Palestinian state now, country by country – without peace, in the absence of any negotiations between the parties, is real. And this bad idea, this threat to peace, must be confronted. If you favor peace, you cannot be for unilateral declaration of a Palestinian state. Peace is the destination, nothing short of the end of all claims.

You can be sure that powerful voices will increase their calls for pressure on Israel. We are concerned that Israel might lack a sufficient numbers of allies in the region, in Europe and perhaps even here, to prevent some of these negative, veto-requiring scenarios from materializing.

We at the Friends of Israel Initiative will re-double our global efforts in defense of a negotiated and consensual agreement, born directly between the parties involved.

By the way, including borders that must be defensible and secure. And we all know that the 67 lines are neither defensible nor secure.

And we will defend the right of Israel to choose the terms of any agreement. Israel is a mature society, with strong and free institutions and a government accountable to its people.

No one from the outside has more right than the Israelis themselves to decide what is best for their future, what risks they can bear when they put their children on the bus or watch them go out on Shabbat.

In Europe, in Latin America, in Canada, here in Congress and in the Administration, everywhere, we will meet with leaders at all levels to convey our message.

In the United Kingdom, where anti-Israel sentiment, and even anti-Semitism itself, is increasingly nasty, we will work to bring together Labour, LibDem and Conservative Friends of Israel and encourage them to confront the abuse of their legal system that is an embarrassment to such a fine country.

In Latin America, where we continue to speak with our peers about the fallacy of unilateral recognition, and so far seen key countries like Columbia and Mexico preventing a wholesale, continent wide slide in that direction, we will create a Regional Roundtable to recruit and empower Friends of Israel in countries across the region to join us in speaking out in explaining why we are Friends of Israel.

We will take emerging leaders from all sectors to Israel, as we grow our networks and demonstrate our solidarity with the people of Israel and the Jewish State.

Why?, you might ask. Why are you doing this? It is very simple: because all those who are involved in the Friends of Israel Initiative believe in Israel.

I believe in Israel. And I am not ashamed to say it.

I believe Israel is an integral part of the Western world. It might be in the Middle East, but it is not a Middle Eastern country.

I believe Israel is a land of opportunities, prosperity and future,.

I believe the risks and threats that Israel faces are the same as those confronting us.

That’s why I think the image of Israel usually portrayed in the media, particularly in Europe, and the treatment of Israel in many international bodies is not only deeply unjust and morally disgusting, it is a major strategic mistake.

When people are delegitimizing Israel, our roots and the values of pluralism, tolerance, innovation, liberty and human dignity are delegitimized as well.

By accepting the criticism of Israel’s right to self-defense, we are allowing those same forces to undermine our own defensive capabilities –against those who seek to impose their fundamentalist way of life over all others–.

Fundamentally, my friends, I believe that if we allow Israel to go down under the weight of its enemies, we all go down.

After less than a year, I’m pleased with what we have achieved….and with the support we have received, but I know we can do more. There is certainly more to do.

Without your support we could not be here, and with your support we plan to achieve much more.
If you want to join us, contact us. Go to our web site. Send us an email. Call us.

Thank you.
May God Bless America, the people of Israel and all who seek peace.