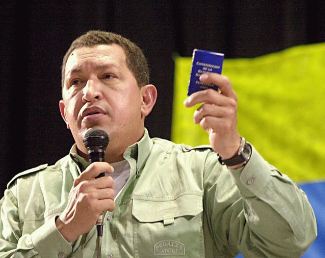 Bearing in mind the dreadful economic situation as well as terrifying insecurity, it is no wonder that Venezuela has experienced a genuine Jewish exodus since Chávez took office.

Anti-Semitism, humanity’s millennial cancer, has taken roots in Venezuela with the help of that country’s national cancer, its Bolivarian leader Hugo Chávez Frías. The level of Judeophobia that the “Espadón de Barinas,” as Chávez is also known, has triggered the production of two studies: Anti-Semitism in Venezuela’s Presidental Election by Lydia Lerner, and Chávez, Jews, and the Left by Claudio Lomnitz and Rafael Sánchez. Both works have helped us to draft these lines.

Hugo Chávez is the consummate anti-Semite, the synthesis of yesterday and today’s Judeophobias. As such, as the new man of such monstrosity, he handles with equal ease religious prejudices (the Jews are the deicide people) as well as economic and political biases (the Jews are usurious exploiters of the weak; the Jews control all the levers of power, which they hold secretly via conspiracies of all kinds). These are the same ideas so dear to the Nazis in the twentieth century and to the extreme Left in the twenty-first century. Of course, or above all, Chávez also incurs in anti-Zionism and the abomination of the State of Israel – another point of contact between red and black fascism.

The Venezuelan golpista is proving to be the best disciple of Argentine’s Norberto Ceresole, one of his early mentors. Ceresole (1943-2003), Holocaust denier, montonero, carapintada, member of the USSR Academy of Sciences, Hezbollah representative in Madrid, "the perfect totalitarian," wrote pieces such as Terrorismo fundamentalista judío (1996) (Fundamentalist Jewish Terrorism), in which “he relaunched the theory of an international Jewish conspiracy actively committed to dominate Latin America” [Enrique Krauze, El poder y el delirio, (Power and Ravings,) Tusquets, Barcelona, 2009,] and Caudillo, ejército, pueblo (1999) (Caudillo, Army, People), about “Comandante Chávez’s Venezuela,” according to the subheading, which reflects the title’s obvious and, naturally, not accidental, Nazi overtones: Ein Volk, ein Reich, ein Führer!, as clamored by Hitler’s henchmen.

Hugo Chávez’s anti-Semitism is old, as Lidia Lerner reminds us in her aforementioned study: In 1998, Venezuela’s popular press published some of his statements, in which he downplayed the Holocaust; in 2002, Chávez accused the Mossad of being behind that year’s putsch intended to overthrow him from power; in 2004, a few days after winning his mandate’s controversial recall referendum, he cried: “Don’t let yourselves be fooled by those wandering Jews!,” in a supposed reference to the opposition. These are just three examples, to which one could add this one from 2006: “The world has wealth for everyone, but some minorities, the descendants of those who crucified Christ, have kept it all.”

Far from dwindling, the Chavista Judeophobia has gotten stronger, particularly since last February, when it became public that Henrique Capriles Radonski would be the only opposition candidate for the presidential elections to be held on October 7. Just after knowing the candidacy of this fervent Catholic of Jewish descent, Mahmoud Ahmadinejad’s best Latino friend cried: “No matter how you disguised yourself, you loser, you have a pig’s tail, you have pig ears, you snore like a pig: you are a pig.” As the Royal Spanish Academy reminds us, during the Inquisition, converts were stigmatized by calling them "marranos" a word becomes synonimous of pigs, “accused of secretly professing Judaism.”

What haven’t the Ceresolian Caudillo and his minions said about “Catholic-Zionist Ratonsky [sic]! They have called him; “Nazi”, “genetically fascist”, “tip of the iceberg of the most abject capital-Zionism that pretends to control and to plunder the huge wealth of Venezuela and Latin America”… that Capriles could surely count on Caiaphas’s vote; that he wouldn’t even mind to be killed by his own people in order to trigger a civil war and, thus, provoke a foreign intervention, which would end with Chávez’s overthrow…

Jewish, Venezuelan, and international organizations have been up in arms many times. As for Capriles, he has refused to sink to his enemies’ level and he has just asked them, with restrained insistence, not to defame his relatives, particularly those who survived the Holocaust or fought against National Socialism.

That said, and bearing in mind the dreadful economic situation as well as terrifying insecurity, it is no wonder that Venezuela has experienced a genuine Jewish exodus since Chávez took office. If, there were some 18,000 Israelites in that country in 2ooo, only 9,000 remained by 2010. During the last two years, they have continued leaving the country. They have gone to Colombia, the United States, the “killing and genocidal” State of Israel, with which Chávez broke off diplomatic ties in 2009. If the Ceresolian Caudillo gets or steals a victory in the 7 of October elections, ¿will he be able to present his great friend Ahmadinejad a Jew-free Venezuela? Which better way to pay tribute to his mentor, the Argentinean Nazi, distinguished by the Soviet Academy and recruited by Hezbollah!