Aznar’s Remarks at House of Commons 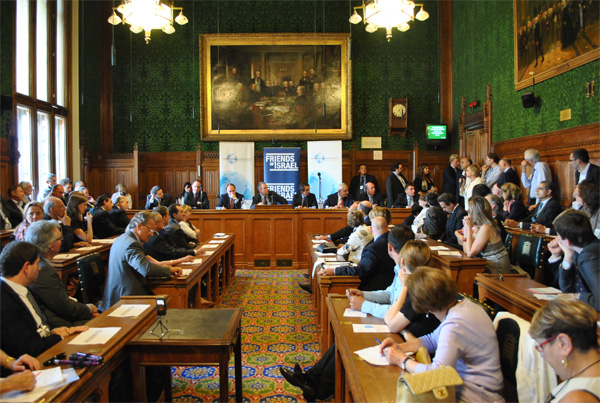 We decided to start moving with our Initiative because we all shared a sense of urgency.

I would first like to thank the Honorable Robert Halfon, MP.

And also Alan Mendoza and all the people at the Henry Jackson Society.

Thank you for making this event possible. I cannot think of a better place to launch the Friends of Israel Initiative than the House of Commons, the very cradle of modern democracy.

We are here today, Marcello Pera, Andrew Roberts and myself, because on May 31st we gathered together with other friends, such as the former president of Peru, Alejandro Toledo; former US ambassador to the UN, John Bolton; French investor Robert Agostinelli; the representative in the Italian parliament, Fiamma Nerestein; the former Spanish minister Carlos Bustelo; the catholic theologian George Weigel, and Lord Trimble (though I have to say that Lord Trimble, having been subsequently appointed to the Inquiry commission on the Flotilla incident, has frozen his activities with us until his work is completed, his absence being filled by the incorporation of Lord Weidenfeld); we all gathered together to launch a new and vital project.

We all believed that it was necessary that somebody should stand up and say, enough is enough, that over emotive and often irrational modes of discourse about Israel are simply not acceptable, that they should be replaced with reason and decency.

We come from different continents, and from a variety of personal experiences. And the key element, I believe, is that, we are non-Israelis and mainly non-Jews. We are, simply put, concerned citizens, concerned democrats.

Why would such a bunch of disparate people feel inclined to defend Israel knowing that we will automatically be stigmatized as Zionist agents, as neo-conservative conspirators, or something worse?

The answer is very simple, as I’m sure Marcello and Andrew will elaborate later on: because we live in a world where losing our moral bearings, loosing our identity, losing the faith in our democratic societies, can only bring our own destruction.

We are used to seeing on TV, and sometimes at closer quarters, the imperatives and consequences of, let me call it, hard-wars. But besides, below or above conflicts like the one being waged in Afghanistan, there is something else going on, let me call it a soft-war. By which I mean an attack on our core values, on our very way of life.

For all the founder members of the Friends of Israel Initiative, Israel is a western democratic country, which is in the forefront of a civilizational struggle.

Israel is firmly anchored in the West because we share the same roots, values, interests, and ambitions; because we share an open political system; the same prosperity-oriented economy; the basic goals to live in peace.

You will see in our first statement, copies of which you will find by the door, why we think what we think and why we do what we do.

But why now, you may ask?

Basically because the world is currently undergoing profound and rapid changes that will have enduring consequences for all of us. We see an emboldened Iran, pursuing nuclear weapons; we see traditional allies of the West asserting themselves in ways that are not always benign or constructive, like Turkey, for instance; we see a Europe focused on economic survival that disregards existential topics like the rise of political Islam among us; and we see a United States of America sending out signals that she no longer places as much emphasis as before on her leadership position of the free world, let alone as the world’s policeman.

And there are many other trends surfacing that point to an ever more weakened west.

We need to reinforce ourselves. There are many ways to do it on a national basis. But we, as a global group, believed that our best contribution would be to reinforce the international standing of Israel. Because many had come to the conclusion that Israel may be the weakest link. That a criticized Israel may evolve in time into an isolated Israel; and an isolated Israel may become a pariah state. At that point, anything could be possible.

That’s why we believe halting this process of eroding the rights of Israel is not only important, but vital: To Israel, of course, but to all western countries. As I put it in a recent op-ed in the Times, “if Israel goes down, we all go down”.

Let me conclude by saying one more thing. We don’t pretend to serve or act as a rapid reaction force every time Israel finds itself in crisis. We would never get a moment’s rest if that were our aim..

Our goal is to be proactive and constructive. We aspire to make the case for Israel as a normal country, with all the virtues and, yes, all of the defects of a normal democratic society. We want to make our case sustainable over time. Israel is usually portrayed in a very negative way. We want, and we need, to open a space to discuss Israel and the wider region in a more rational way.

It will take a lot of effort, and time, as well as money. But we believe we will see results. You don’t win wars by adopting a purely defensive posture. Neither do you win wars by simply focusing on the particular crisis of the moment.

We decided to start moving with our Initiative because we all shared a sense of urgency. It wasn’t an easy decision, I have to say. And you only have to remember that the very same day we were meeting for the first time, Israel was subjected to the most severe international condemnation after defending itself from a flotilla that was deliberately designed as a weapon of mass provocation.

We are here to be practical about our values and goals. We are not here because we want to be loved. Nonetheless, I have been heartened by the support that we are already getting. In the first days of putting our mission statement on the web, we received thousands of signatures supporting it, and supporting our Initiative generally.

With your help and goodwill, we will succeed. I commend this new Initiative to all of you.

Thank you very much