The Friends of Israel Initiative mourns the passing of Lord George Weidenfeld of Chelsea, one of our Founding Members 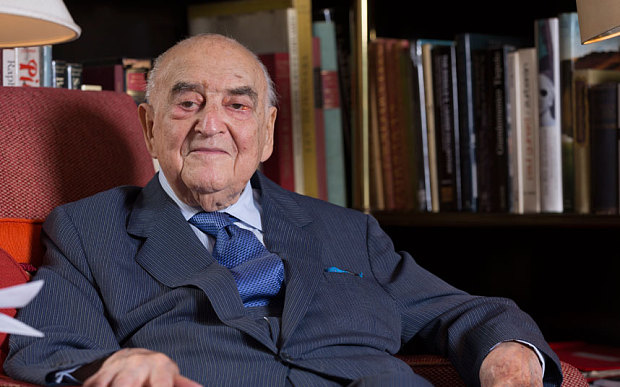 Lord Weidenfeld was one of those few men who write the history. He was very involved in the highest causes of our times and was an exceptional witness of all the moments that have configured our current world. He moreover taught all of us also an universal lesson for success and greatness: never give up.

Our hearts and feelings are with the family of Lord George Weidenfeld, who passed away on January 20. Lord Weidenfeld was one of the founding members of the Friends of Israel Initiative, but above all, he was an exemplary man who stood for freedom, peace, democracy, and human rights during his entire life.

Lord Weidenfeld was one of those few men who make history. He was very involved in the most elevated causes of our times and was an exceptional witness to all the moments that have made our current world. Moreover, he taught all of us also a universal lesson for success and greatness: Never give up. In spite of having to flee to London after the annexation of his homeland, Austria, by Nazi Germany, he worked hard and became a renowned publisher, a generous philanthropist, a brilliant columnist, and an education programs leader at the University of Oxford.

Lord Weidenfeld’s commitment focused on helping the oppressed and pursuing international peace, which led to overwhelming recognition by the most prestigious institutions and organizations in the West. He was knighted in 1969 and appointed Knight Grand Cross of the Most Excellent Order of the British Empire (GBE) in 2011. Lord Weidenfeld was also awarded with the German Knights Commanders Cross of the Order of Merit (1991), the Austrian Cross of Honor First Class for Arts and Science (2002), the Decoration of Honor in Gold for Services to the County of Vienna (2003), the Italian Grand Officer of the Order of Merit (2005), the Order of Merit of the Land Baden-Württemberg (2008), and the Polish Bene Merito distinction (2011).

Recently, the chairman of the Friends of Israel Initiative, Jose Maria Aznar, thanked and congratulated Lord Weidenfeld for setting up and funding Operation Safe Havens, a mission aimed to rescue up to 2,000 Christian families in Iraq and Syria, who were suffering the terror of the Islamic State. As Aznar remarked then, Lord Weidenfeld’s commitment is an outstanding moral example for Western civilization.

At the Friends of Israel Initiative, we had the great honor to have him as a founding member. We will forever be grateful for his support and leadership as well as for his achievements as an exemplary man that defended all the dignity that the West has provided throughout history. Lord Weidenfeld will remain a guiding light for all of us.