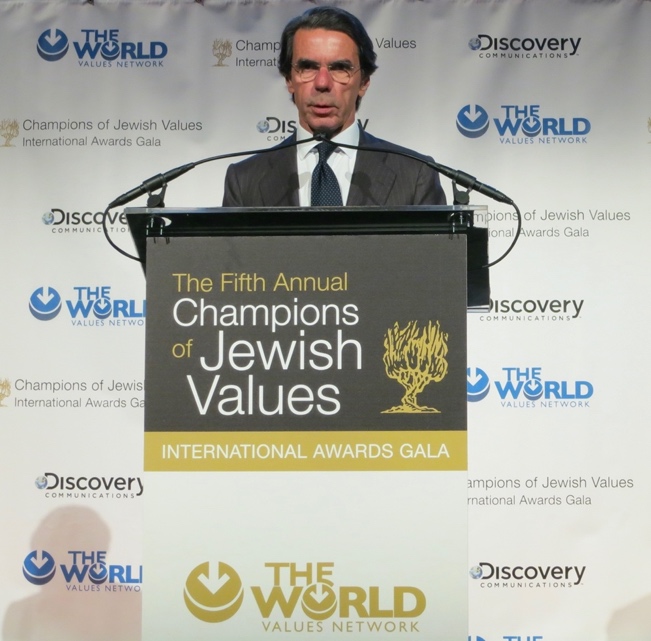 FOII’s Chairman Jose Maria Aznar was honored in the Fifth Annual Champions of Jewish Values International Award Gala for defending Israel in the world. This high distinction was granted by the World Values Network, an organization dedicated to disseminate universal Jewish values in politics, culture, and media, making the Jewish people a light unto the nations.

This prestigious award means an explicit recognition of the intense and important work that FOII has carried out since its foundation in 2010 —and it is also a clear sign of the high-level reach achieved by FOII.

Jose Maria Aznar delivered in the Gala the following speech:

Ladies and Gentlemen, allow me to start expressing how privileged I feel tonight, being one of the honorees.

I would like to congratulate and thanks at the same time The World Values Network for the work it does advancing Jewish values across the globe.

Also, I must express my sincere gratitude to the hosts tonight.

And of course, to all the rest of honorees. Their work and devotion to Israel and Jewish values should be rightly recognized.

Some of you may think that as a politician I may choose power over values. But I don’t. On the contrary, I do believe that without clear and firm values, what you can get is very poor policies. In power, you learnt how to achieve things using the machinery at your disposal. But you must arrive to power knowing what is right and what is not. That, you don’t learn in government. You must bring your values with you first.

And I have to say it: It is not Israel the abnormality. It is us, the Western leaders and people, demanding abnormal things from Israel.

That’s why, a few years ago I decided that enough was enough, and called upon a group of friends to stand up to defend such a basic thing like the right to exist of Israel, and the need to treat it fairly. It wasn’t easy in the beginning, because for non-jewish people, former PMs and ministers, defending Israel was a risk, particularly in Europe. But the founders of Friends of Israel Initiative were not afraid of risks, and today the group has expanded to the five continents.

What we try to achieve is simple but difficult: to convince our peers to avoid making mistakes that may put at risk the security and the future of Israel.  We do that through engaging them in private talks, but when is needed in putting pressure on them, from the UN Secretary General, to NATO Secretary, the Director of Interpol or, lately, the director of the FIFA, just to mention a few.

Sometimes we achieve our goals, sometimes we just express our disagreements and concerns, like we did and we still do in relation to the agreement with Iran over its nuclear program.

In any case, we keep trying.

And we do it thanks to the support of a few friends.

Jewish values were the cradle of our Western civilization; Israel is today at the forefront of a civilizational struggle between civilized people and barbarians; Israel is nowadays offering to the entire World technical solutions to many problems, from water treatment to nanotechnologies and innovative medical treatments. Israel is not only our past, it is our present fighting terror, and our future if we want to excel in the technological world that is coming.

That’s why defending Israel is so important. It is vitally important. This is the message we try to convey through Friends of Israel Initiative, thanks to you and your support.